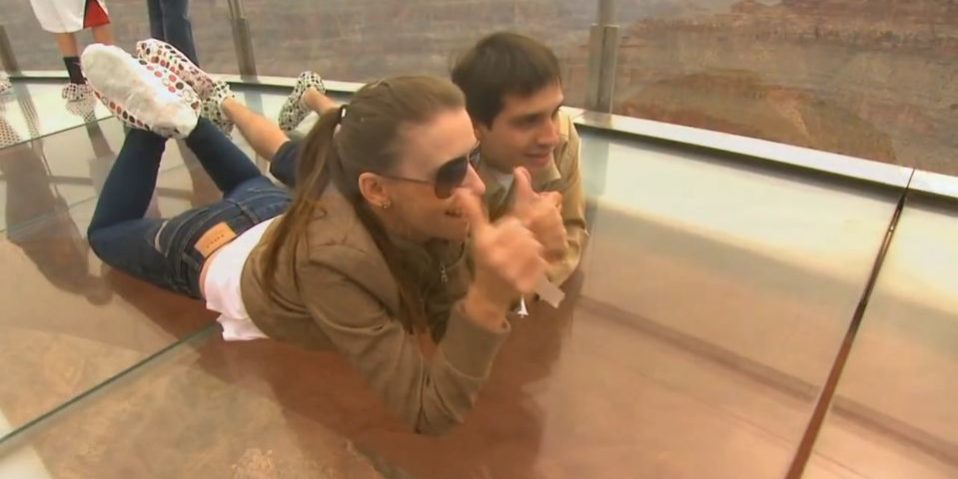 The Grand Canyon Skywalk is a transparent horseshoe-shaped cantilever bridge and tourist attraction in Arizona near the Colorado River on the edge of a side canyon in the Grand Canyon West area of the main canyon.USGS topographic maps show the elevation at the Grand Canyon Skywalk’s location as 4,770 ft (1,450 m) and the elevation of the Colorado River in the base of the canyon as 1,160 ft (350 m), and they show that the height of the precisely vertical drop directly under the skywalk is between 500 ft (150 m) and 800 ft (240 m).

Commissioned and owned by the Hualapai Indian tribe, it was unveiled March 20, 2007, and opened to the general public on March 28, 2007. It is accessed via the Grand Canyon West Airport terminal or a 120-mile (190 km) drive from Las Vegas, which includes a 10-mile (16 km) stretch of dirt road which is currently under development. The Grand Canyon Skywalk is east of Meadview and north of Peach Springs with Kingman being the closest major city.

David Jin, an entrepreneur who had been involved with tourism and the Hualapai Nation for some time, had the idea of extending a platform out over the edge of the Grand Canyon. With the help of architect Mark Ross Johnson, that idea evolved into a rectangular walkway and eventually the “U”-shaped walkway that has now been constructed.
httpv://vimeo.com/33760093
The overall Skywalk width is 65 feet (20 m). The Grand Canyon Skywalk length extending out from the post supports closest to the canyon wall is 70 feet (21 m). The outer and inner 32-inch-wide (810 mm) by 72-inch-deep (1,800 mm) bridge box beams are supported by eight 32-by-32-inch (810 mm × 810 mm) box posts having four posts on each side of the visitor’s center, once completed. The eight posts are anchored in pairs into four large concrete footings that are in turn anchored to the bedrock by ninety-six 21⁄2-inch-diameter (64 mm) DYWIDAG (acronym pronounced Doo-Wee-Dag) high strength steel threaded rod rock anchors grouted 46 feet (14 m) deep into the rock.

The deck of the Skywalk has been made with four layers of Saint-Gobain Diamant low iron glass with DuPont SentryGlas interlayer. Deck width is 10 feet 2 inches (3.10 m). The Skywalk glass railings were made with the same glass as the deck, but fewer layers (two) bent to follow the walkway’s curvature. The glass railings are 5 feet 2 inches (1.57 m) tall and have been designed for high wind pressures.

The Grand Canyon Skywalk deck was designed for a 100-pound-per-square-foot live load along with code required seismic and wind forces. The foundation can support the equivalent of 71 loaded Boeing 747 aircraft or an 8.0 magnitude earthquake within 50 miles (80 km).[3] Fine-tuning of the project occurred after a wind loading and pedestrian induced vibration analysis. Two tuned mass dampers were installed inside the outer box beam as well as one inside the inner box beam at the furthest extension of the Skywalk to reduce pedestrian footfall vibration. The walkway could carry 822 people that weigh 200 pounds (91 kg) each without overstress, but maximum occupancy at one time is 120 people.

The Grand Canyon Skywalkwas assembled on top of the canyon wall in line with its final placement and moved into final position by a jack and roll rig. The Skywalk infrastructure itself weighs a little over 1,000,000 pounds (450,000 kg) without counterweights but including the tuned mass dampers, railing hardware, glass rails, glass deck and steel box beams. At the time of roll-out, the Skywalk weighed approximately 1.6 million pounds. The process was completed in two days.

The Skywalk glass itself was manufactured and imported from Saint-Gobain Deutsche Glas (Kinon in Aachen) and Glas Döring in Berlin, Germany.